Matthew Patterson
and the
Wish Defenders

“In this middle-grade fantasy debut, the removal of pennies from a
water fountain unleashes magical forces both good and evil.”

Watch kids react to the book! 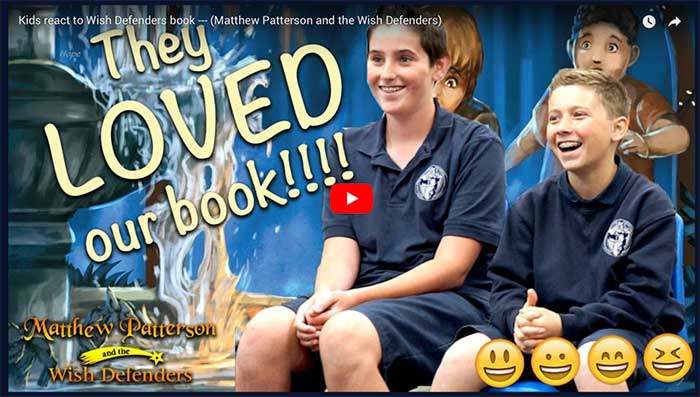 “In this middle-grade fantasy debut, the removal of pennies from a water fountain unleashes magical forces both good and evil.”

Still stinging after his year-long wish to make the school football team is crushed, mischievous, thirteen-year-old Matthew Patterson unintentionally gets revenge on wishes by snatching three coins from an enchanted wishing fountain, altering his and others’ lives forever.

The coins Matthew removed represent three people’s fulfilled wishes, and his act unleashes a catastrophic chain reaction. A young star athlete, about to play in her WNBA championship game, loses the amazing basketball skills she’d wished for. An elderly woman, whose husband wished for her recovery from a life-threatening condition, falls ill again. And in a cruel, ironic twist, Matthew’s mortality slaps him square across the face—the third coin is the coin his parents tossed into the fountain when they wished for a child.

If the coins are not returned to the fountain within twenty-four hours, the wishes—including Matthew—will vanish and be lost forever.

With his best friend, Johnny, Matthew ventures on a life-changing, twenty-four-hour journey, battling demonic forces led by Bolterkein, leader of the mystical creatures known as the Wish Stealers, whose only desire is to stop Matthew and gain power from the lost wishes. Unfortunately, Matthew’s only aid comes from the hapless Wish Defenders who, too, will lose everything if Matthew fails in returning the coins in time.

Watch kids react to the book!

Michael Holm was born at Saint Joseph Hospital in Burbank, California, with NBC television studios on one side and the Disney film studios on the other. The world of imagination and creativity was destined to part of his life.

While celebrating with his family at their favorite restaurant, his young nephews removed some coins from a fountain sparking an idea so powerful, so exciting, Michael had to pursue it. With the help of his writer friend, Rick Foster, they completed a script based on that idea, which then led to the novel Matthew Patterson and the Wish Defenders.

Rick Foster is a writer, composer, musician, and dad from Chicago, Illinois.

He has been telling stories to his own children for three decades and finally decided to share one with the rest of Earth’s kids. This book – Matthew Patterson and the Wish Defenders!!!

Fill out the form to the left, to contact us.  We will respond as soon as possible.

If you choose to sign up for the mailing list, rest assured that we will not disclose your email or other personal information, to any third parties.